Getting Crafty with Dunfermline High School 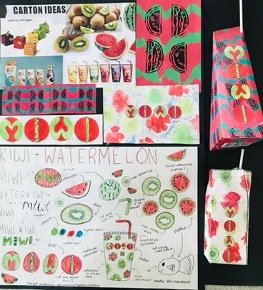 Our pupils have had to consider design issues such as the intended target audience for the product while also showing an awareness for sustainability, which are two very important factors that impact aesthetics and function.

Each S3 class opted for a different style of graphic, giving a competitive aspect to their work. Now that they have completed the design folio and outcomes, the final products will be sent back to Kirsty and Thirst Craft to be discussed and evaluated by a panel of graphic designers. The evaluation process will be filmed and the pupils will find out who the overall winner is from each class. The winners must have followed the design brief process and will no doubt be the basis for discussion by Thirst Craft. 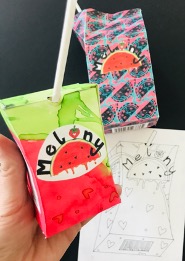 Dunfermline High School’s aim is to build on our S3 pupils’ design process knowledge by carrying out a body of work set by Thirst Craft. This hooks them in as they will get feedback on their achievements, building on their awareness of graphics out-with their school community and in the wider world – it’s a 360-learning opportunity.

As potential National 5 candidates next year, we hope that the skills and techniques learned this year will be banked and they can build on these further. Carrying out this body of work with Thirst Craft is encouraging them to ask questions about the creative industries and this in turn should encourage wider knowledge and understanding when it comes to the written element of their course.

“I brainstormed ideas for my name by combining the fruit names. This created names such as Waterberry before I decided on my final name Melony. My name then had to be developed further with the use of colour and typography styles. I used vivid red and lively green and a harsh black colour and the style of lettering was inspired by a watermelon by having the name curved round the watermelon and having black lettering so your eyes are drawn to the dominant colour.

”I used press printing techniques to create my first development idea for my carton. The colours I used for the background include red and green and the shapes I cut were flowing waves to replicate the watermelon skin. I then created a repeat pattern on PowerPoint from this press print and selected an interested Net form which looked like a slice of watermelon.

“I used Brusho inks to create my second idea. I painted using a vibrant pink-red and green colours and strawberry with green stems sprouting across the page pattern which were inspired by my fruit.

“I decided that I preferred my second box because the shape was suitable for a child since the box had concave sides a child could easily grip onto it comfortably and wasn’t too big so it wouldn’t be heavy to hold. Also, the design was brighter with its colours and the theme of the hearts throughout the carton is pleasing to a child’s eyes.”