Michael Phimister is a student at Rosslyn School in Kirkcaldy and since August 2021 he has been participating in an employment project specifically designed for young people with complex additional support needs. Michael has been successfully learning about different careers and developing his employability skills during weekly sessions.

Michael has autism and benefits from regular routine, simple communication and having the time to process new information.  He can become overwhelmed in new situations or if he is required to process a lot of information. Michael is also hyper-sensitive to the noise of others.

It was agreed that Michael would benefit from being involved in the local community to develop his skills and volunteering would be a positive way of achieving this while introducing him to the world of work.

It was important to find the right volunteering match for Michael which would accommodate his needs while providing the opportunity to meaningfully contribute to an organisation.

Furniture Plus are a charity who recycle, repair and resell furniture while offering to upskill individuals furthest from the job market. As part of their work, they also sell used books, CD’s and DVD’s. Michael has a keen interest in TV and film therefore was given a role at furniture plus to scan these items into a online database which values and buys the products. Michael volunteers for one hour every week during his school timetable and regularly generates profit for Furniture Plus. He is provided with a private room to complete his work which helps him avoid distractions and avoid unwanted noise. The success of this volunteering is a huge testament to Michael and his hard work.

Michael has shown what’s achievable when barriers are removed and a successful partnership is developed between the school and employer.

“Michael has benefitted a great deal from Brendan Walsh’s DYW input this session. I think that the experience of getting to know a new person and having to deal with an ‘unknown’ element (in that Brendan has generally supplied a different task week on week) has been good for Michael. In addition, Michael’s work placement at Furniture Plus has so far been a success. Once again, Michael has had the experience of going to a new location and meeting new people, with the added bonus that he has a relatively useful (and for him, achievable) task to carry out. I know from my communication with Michael’s parents that they feel Michael enjoys his weekly visit to Furniture Plus, and they are keen for the placement to continue, if possible, into Michael’s final session in school after the summer.” 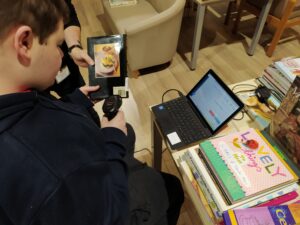 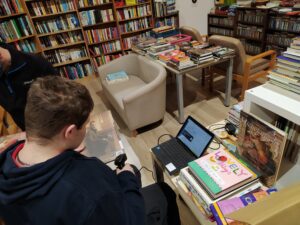