120 of Lochgelly High School’s young people recently took part in the Fife STEM Connectability Festival which focused on promoting STEM as a career choice for our young people in Scotland, with a focus on getting more girls into STEM careers.

The workshop was funded by the RAF Youth and STEM Team. Hyett Education are contracted through the RAF to offer several different STEM programs that can be delivered in schools. Hyett believe that there ‘is a real shortage of girls in the Engineering Sector and that we are missing the next potential great Scottish engineers who could follow in the footsteps of Alexander Bell, Lord Kelvin and many more.’

The day was divided into three repeated workshops, each offering places for up to 40 S2 pupils. At the beginning of each session the pupils were introduced to the great heritage of Engineering that has taken place here in Scotland and the many famous Engineers that have been nurtured here.

The pupils where then introduced to the basics of how to code their LEGO Mindstorm robots. They were shown how to change the pattern on the front of the hub to look like a face. They were then shown how they could use input devices and a series of code to make their robots react to the changing environment around them. An example of this was the pupils used camera to detect colour changes that enable code that would then manipulate the motor to increase/decrease speed or change direction. 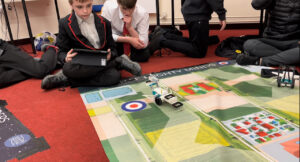 The pupils were then given the opportunity to showcase their creative ability by designing and building their robots so that they were unique and creative. Once built, the pupils were then set the challenge to navigate their robots from a starting point to a finish location. These routes were not straightforward and required several turns and arcs to achieve their end goal success. To navigate the paths the pupils had to use a range of input/output devices and a range of coding to be successful.

The pupils had a great day and a significant majority complained when their unit was over as they were so engrossed in the challenge. We had several young people who took part that day that struggle to engage with our mainstream education, yet they were some of our best performing pupils.

This event was a very accessible activity for all our pupils that allowed personalisation and choice that enabled our young people to meet a level of difficulty that challenge them to think and overcome adversity. We are now looking to agree a partnership with Hyett to have this event take place annually. 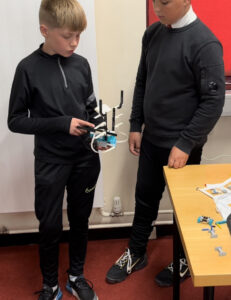 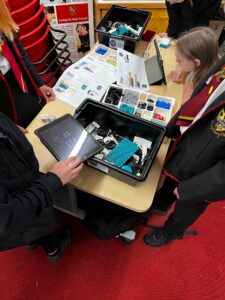